I don’t know about you guys, but I love top ten lists. When Vurdlak asked me if i could do one, I was really excited and a little surprised to see that there are only two top-tens on the site already. Well, rest assured that if you like posts like this, I’ll be happy to contribute plenty of them to the site -in fact, if you have any ideas for lists you’d like to see, feel free to leave your ideas in the comments here and if Vurdlak and I both like them, you just might see them in an upcoming post!

As for this first top ten list, I thought tattoos would make a great topic -after all, you have to really love an illusion to get one tattooed on you. This first tattoo is my personal favorite because it’s such a classic illusion subject –multiple meaning one. These work really well as arm  tattoos because you never know if someone will view it while your arm is raised or not, making it the ideal location for such a piece. This specific design was done by David Page. On the left, you have a queen, but when you flip her upside down, you have a king. 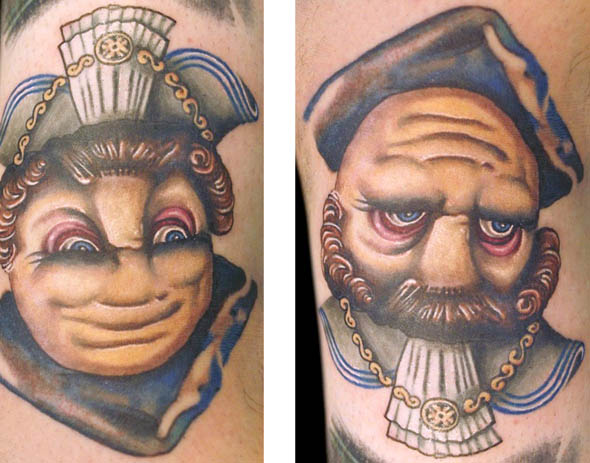 Next, the skull illusion tattoo involves one of my favorite types of illusions. What’s so great about skull illusions?  Let’s face it, they’re just so cool! It’s also a great idea for a tattoo since skulls are one of the most classic tattoo designs, but this interpretation brings the concept from cliche to chic. 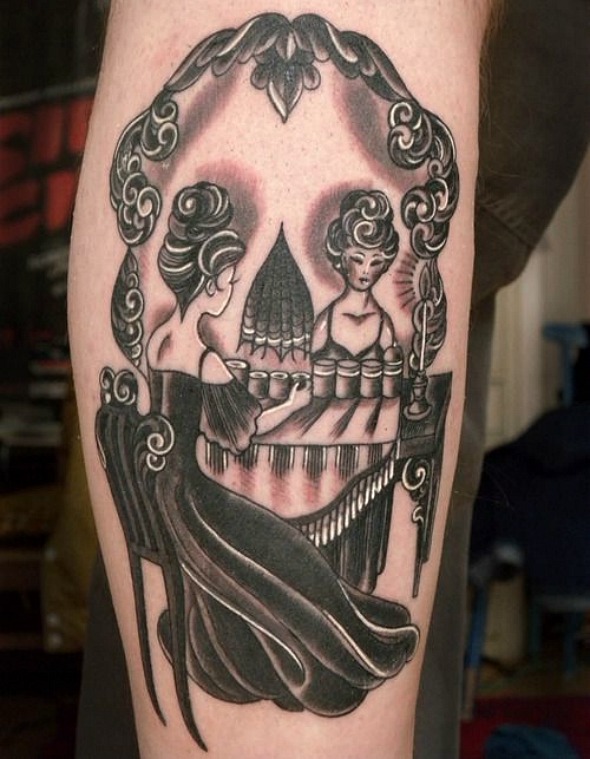 Here’s another excellent skull illusion tattoo, this one involving two clowns holding hands while drinking. The tattoo, by Kate Hoogland, just might contain the most romantic skull illusion I have ever seen.

On the right, we have a brilliant rendition of M.C. Escher’s Drawing Hands illusion. The piece, done by Cheryl Volling, has some absolutely stunning shading, giving it the life-like appearance of the original Escher drawing. 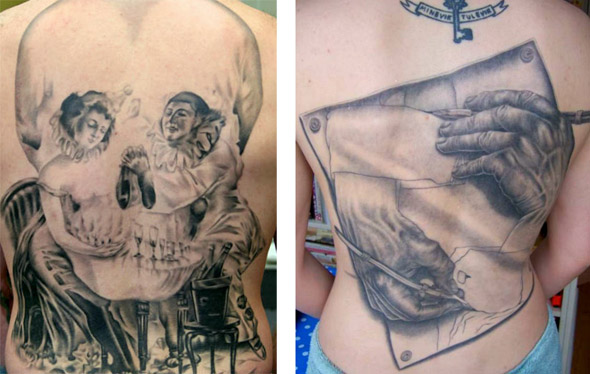 This ambigram tattoo is great in that it incorporates some of the most important aspects of philosophy into an ambigram. It’s also particularly nice in that it is easy to read and doesn’t look strange from either direction, which is one of the hardest aspects in making an ambigram. 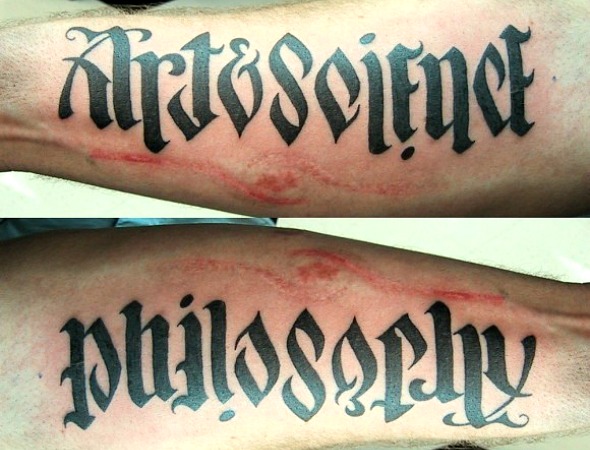 This saint/sinner ambigram is also easy to read, but rather than focusing on the arts and sciences, it focuses on religion. I think it really seems to denote the true duality of man. 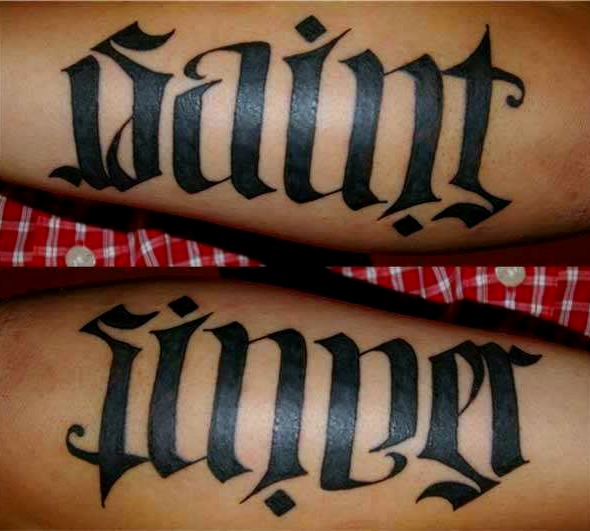 Here’s another cool religious optical illusion, albeit in a a totally different style. If you don’t see the illusion, just back up a few more inches and then you’ll see that the image comes together to make the face and beard of Jesus.

On the right is another Escher tattoo, this one is on Flickr user’s alan.maia profile and features fish transforming into birds (and vice-versa) artwork. Maybe it’s just me, but I really love how worried that last fish in the tattoo looks. 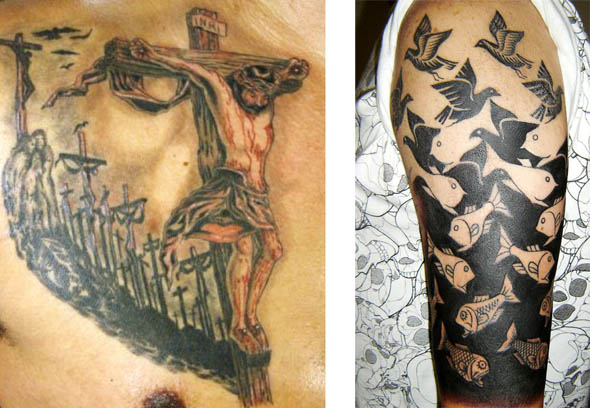 We’ve featured a few of Del-Prete’s illusions before, but this impossible object tattooed on Flickr user bonstance and seen in the book Masters of Deception is still new. 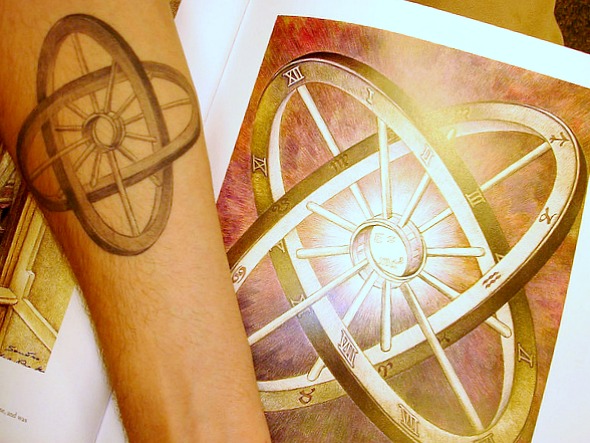 Here’s a great tattoo with a double meaning. Is it a face or a cartoonish man playing saxophone? 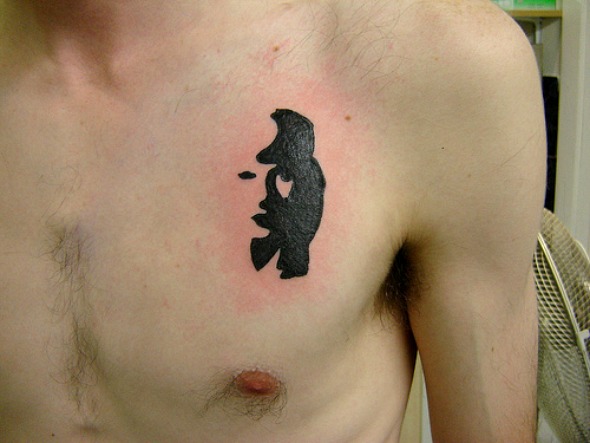 Bonus: While it’s little anamorphic, this one might not technically be an illusion. Even so, the details are amazing enough to make it looks completely realistic. 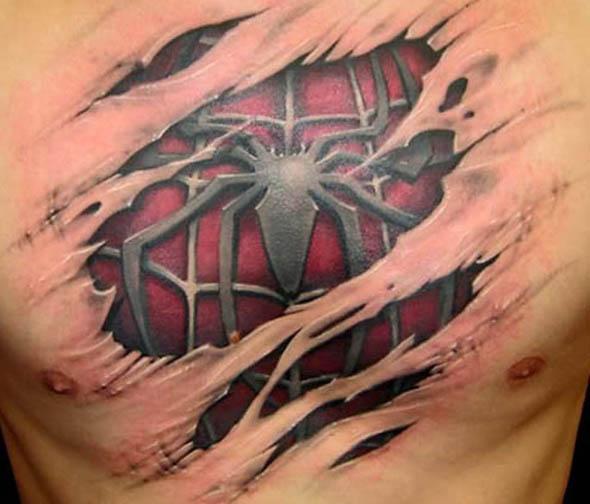 Now, before I sign off, I thought I’d ask you guys about your own tattoos. After all, if you’re a regular reader of Moillusions.com, you just might be the type of person who’s willing to get an illusion tattoo. So, do any of you have illusion tattoos? And if you do, do you have any links to the pictures online? I know I’m not the only one who’d love to see them.

Also, I’m a big fan of giving credit where it’s due, so if you know who did any of the tattoos that aren’t labeled, please leave their names in the comments. Thanks guys!