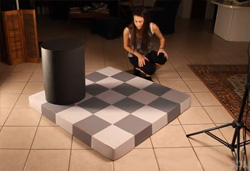 Checkers optical illusion, one of the very first illusions to appear on this site, an old time goodie and my personal favorite is blessed with the regular habit to reappear out of nowhere. In whichever form it gets recycled, the effect stands strong and it always gets best reviews. Just check out today’s real-life video of the original checkers illusion, shot in a professional studio.

Youtuber who goes under the name of brusspup noticed how this illusion has been around for a long time but always in the form of an image. His goal was to take it away from a flat piece of paper and turn it into a real, life-sized illusion that people could interact with. Obviously, brusspup has succeeded. He even included a scaled-down template for us to download and play with (file courtesy – brusspup).

Here’s how the author explained the effect and what he has done to achieve it: