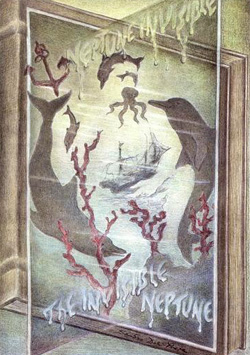 Just found this piece in my mailbox, submitted by an anonymous fan. It seems we haven’t heard the last from Sandro Del Prete with our previous mega gallery. Today’s illusion works in a way “What do you see?” illusion worked. Only no sex this time. Some of you will notice the invisible Neptune first, and only later realize there are bunch of see animals instead. Others will see just the opposite.

I think the trend began with Napoleon’s Grave and Invisible Prince mural. Still, it makes one fine optical illusion, but hey – we haven’t expected anything less from great #Sandro Del Prete, haven’t we? Be sure to check the tag to see most of his previous illusory works!

When you’re done, there is another impossible illusion to be found in the poster on your right. How long does it take for you to see it? Looking forward to hear your comments!

39 Replies to “The Invisible Neptune”