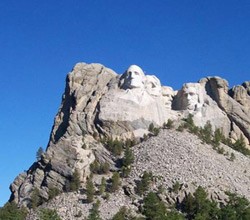 I’m not exactly sure if Jerome Santucci discovered this interesting phenomenon, or did he just report what he learned. Apparently, if you observe Mount Rushmore from certain point, you can see that four former US presidents aren’t the only ones present.

Turning the photo for 90 degrees can help you visualize the fifth persona even better! Who would you say it represents? Think this was by accident or intentionally planned?

Anyway, here’s an interesting fact about Mount Rushmore: did you know that the four presidents carved into the granite were initially planned to be depicted from head to waist? Unfortunately, lack of funding forced construction to its end. Either way, the memorial still attracts approximately two million people annually! You can see Gutzon Borglum’s (man behind the idea) original plans by visiting this wikipedia page.

135 Replies to “The Fifth Face of Mount Rushmore”