Wow! While watching the TV show Brain Games last night, and they showed a pretty awesome photograph that I just had to share with you guys! Check out this National Geographic camel illusion! 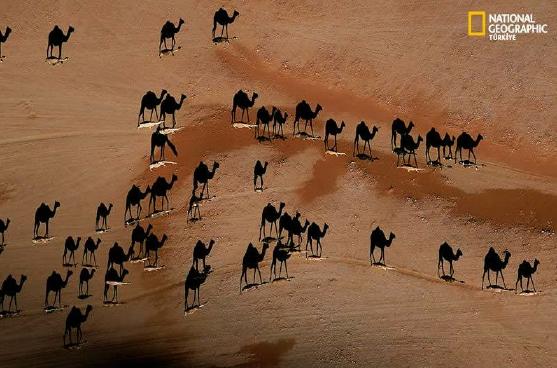 It’s pretty obvious that this is a photograph of a camel train traveling across the desert, no? So, you might be wondering why this is even considered to be a camel illusion. Well, take a closer look. Still don’t see it? I’ll give you a little hint. This photograph was taken from above, with the camera pointing straight down.

This camel illusion was taken by George Steinmetz, a photographer whose work has been featured in National Geographic magazine. In order to gain an aerial perspective, Steinmetz used a motorized paraglider. The resulting photo was used in a 2005 Turkish National Geographic feature story about deserts.

What did you think about this camel illusion? If you loved it, make sure you check out this zebra shadows illusion, also from National Geographic!