Few days ago I found this image on flickr, and was puzzled for a while. Am not sure if it’s photo or a painting, but it hides an awesome optical illusion. I still can’t decide it the photo I’m seeing represents some kind of a tunnel, or top (peak) of a pyramid of some sort. Which one do you think it is? How did you decide? Are there any hints you can share with rest of us?

I also read that you think I link too many words in my descriptions, which I admit can be little distracting. I’ll try and link less, but more targeted illusions through my links, so please comment if you think I improved my technique?

Concerning my vacation, I’m having a blast here on Adriatic coast, you should definitely visit south Croatia when you have opportunity – like Mecca, you have to see it at least once in your life. Islands and cities like Korcula, Dubrovnik, Hvar… are something so beautiful, you can’t imagine. The only bad thing that happened, is that my forehead burnt under the sun, so I had to stay inside the house last 2 days. My brother had the same problem, which you probably already read on his website. Enjoy summer! 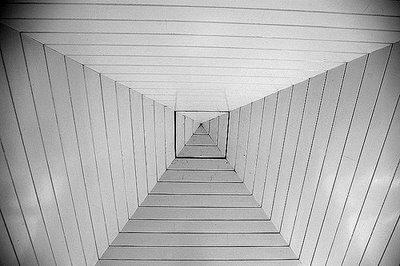