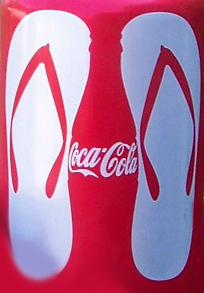 I have just found this illusory coca-cola can showcased on Deceptology blog. It works in a way where empty space between two slippers forms a globally recognizable bottle shape (logo). Very similar ad was already featured by Cola for their Zero line of caffeine drinks. Dunno if you can recall us featuring it in the past.

Still, both examples borrowed and then inverted the idea from an old-school example called Rubin Vase, one that usually features a bottle of some sort, that can either be seen as central bottle or empty space between to head profiles. I believe you already know what I mean, even if my explanation turned clumsy ;D