Stephanie Jones mailed me this awesome flick! Let’s make her describe it herself: “Hi! I really enjoy your site, and when I came across this in my lecturer’s blog, I thought I’d better send it in to you. It looks like another version of the Leprechauns illusion you have. One of the most popular puzzles ever created was the Get Off the Earth puzzle, invented by American’s premier puzzlist, Sam Loyd, in 1898. Over ten million copies of the puzzle were produced.

The puzzle shows a number of Chinese warriors around the rim of a circular piece of cardboard fastened at the center to a larger piece of cardboard so it can be turned. Part of each warrior is inside the circle and part is outside. When the disk is rotated from its initial position to its second position, one warrior disappears! The challenge is to explain how this “disappearing act” works.

Well, there never were 13 Chinamen. There were many parts of Chinamen, arms, legs, bodies, heads, and swords. And each had tiny slivers missing. Then when the Earth was rotated, these pieces were slightly rearranged. In particular, each of the 12 Chinamen gained a sliver of a Chinaman from his neighbor. For example, at the lower left, there are two Chinamen next to each other. The top one is missing a foot. When the Earth is rotated, he gains a foot from his neighbor on the right. That neighbor gains two feet (he lost one) and one small piece of a leg, etc.

This is a particularly good example of a vanishing puzzle. See The Extra Square, which is a vanishing puzzle in reverse. You can download the graphic below or the higher resolution file getoffearth.pdf Print on lightweight card stock. Cut out the second figure of the two figures. Place the disk so that the arrow points N.E. and count the warriors. Then turn the disk so that arrow points NW and count again. 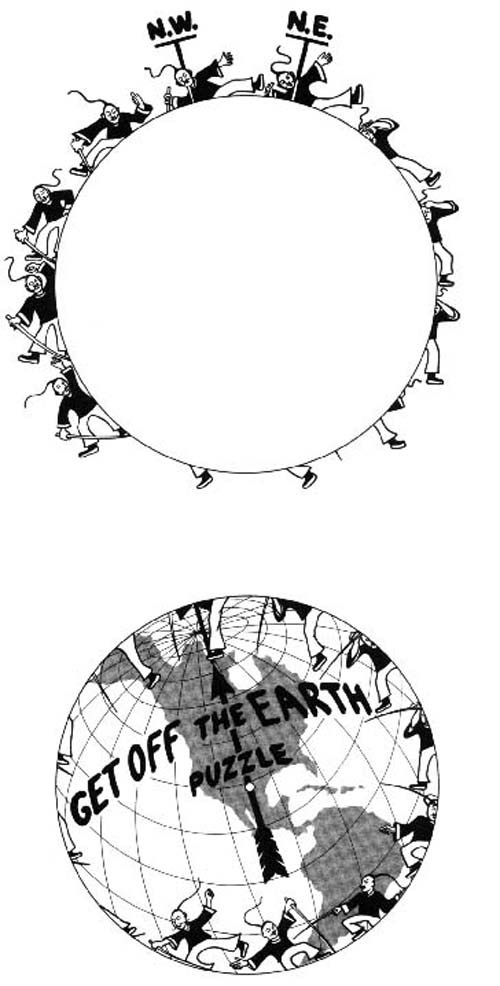 31 Replies to “Get Off The Earth Optical Illusion”