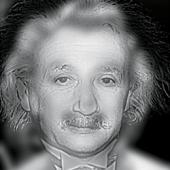 Albert Einstein was a big fan of Marylin Monroe, a very famous American actress and idol. Their connection was probably stronger than we assumed. I have an evidence photo to show you! They used Einstein’s genius combined with Monroe’s beauty to create a unique optical illusion. They couldn’t be seen together in one place (probably because of Albert’s wife, Elsa), but still eagerly wanted a photo of themselves. So Albert used 0.1% of his brain capacity, and thought of a solution. He created a hybrid image of himself and Marylin, where you can see both of them in it, but only one at the time. As you see, if you position yourself close to the screen you will see Einstein’s happy face. Now move away few meters, and you’ll see Marylin! Surprise, yes Albert vanished, but only for so long until you come near the photo again. I hope you are aware that the story I wrote few lines above, is just fiction, and only crazy idea I got in my head. However, the illusion is 100% real. By the way, I just watched Leonida’s 300 in theater with my gf. You really should go and see it, it was amazing!