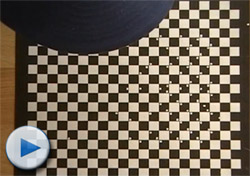 From the creators of recently popular Brown Diamonds and Shades of Blue Optical Illusion, now comes this interesting video posted below. Exactly two hundred tiny squares of paper were cut by hand, and then strategically placed on chessboard pattern to create the visual effect shown. Then an unexpected and creative method of revealing the illusion was used.

I believe most of you are already well introduced to the pattern used in the video.  One of our categories – Seemingly Bent stuff, holds more than a dozen of examples where mentioned white squares were used to create optical illusion of bent lines. This video should be the first one placing mentioned illusion in center of attention. Check the embedded flick, and reply if you believe it adds some value to our collection.

26 Replies to “Checker Board Illusion Video”