Has anyone else seen this cat optical illusion floating around Facebook? It was even featured on the Today Show, and I’m not sure how I missed it until now. 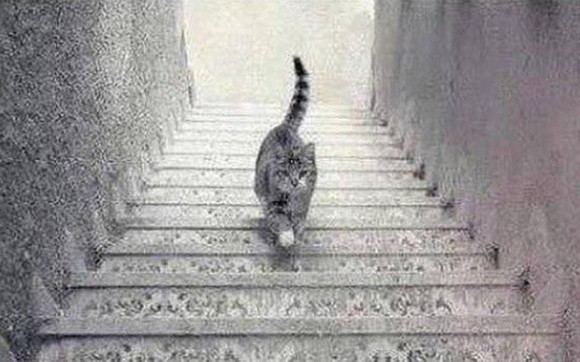 Now look again and answer me this—is that cat going up or down the stairs? People who have looked at this cat on the stairs have two completely different opinions. Let’s call the Team Down the Stairs and Team Up the Stairs.

Team Down the Stairs uses the tail to support their decisions. They say that if the cat was heading down the stairs, then its tail would be pointing downward, or behind it. The position of the tail helps the cat balance. However, I’m a cat owner myself, and this doesn’t necessarily prove this theory for me. I’ve seen my own little fur ball scamper down the stairs with her tail straight in the air. But, then again, she’s weird.

On the other hand, Team Up the Stairs points out the edges of the stairs to support their opinion. These look like the overhang of the treads, which could be seen if you were looking up from the bottom of the steps. On the other hand, what looks like tread overhang could also be a wood molding protecting a mosaic tile on the steps, which supports the fact that the cat is indeed going up the steps.

Up, down, all around what do you think? I know I’ve already formed an opinion and joined a team. Let us know if you’re on Team Up the Steps or Team Down the Steps!

If you liked this illusion, make sure you check out this mind boggling stair illusion!

5 Replies to “Is this Cat Going Up or Down the Steps?”