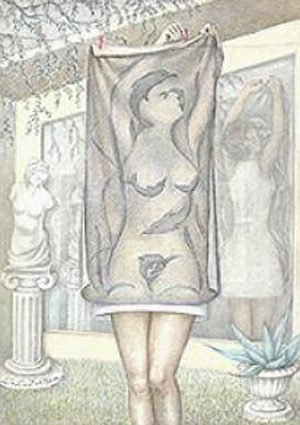 It took me 3 years having this painting on my disk before realizing the illusion it holds. Until today, I considered this work by Sandro Del Prete nothing more than a boring NSFW piece of art.

As you can see, the woman is hanging a bath towel on a clothesline, but is unaware of the sensual illusion to which we have fallen victim. No, the woman isn’t really nude. You’ll probably want to check this again!

The illusion it took couple of years for me to notice, is caused by the illustration printed on the bath towel. The towel depicts motive of five dolphins playing in the algae (sea grass), which “accidentally” resembles something else. If you don’t believe me, check out the window reflection in background – it clearly shows that the woman is decent and wearing her clothes as she should.

There is even better version of this illusion available, one that we posted in the very beginning of this site! Be sure to check the original Dolphins Illusion once you’re finished reading this.