Anyone else love gummy bears as much as I do? There’s just something about the yummy, squishy candy that I just love! I’m sure partly because it reminds me of just being a kid and partly because they’re just plain yummy. But, there’s something else… Oh yeah! When you’re angry, there’s nothing quite like biting something’s head off. Maybe that’s why I found this giant gummy bears illusion so fun! 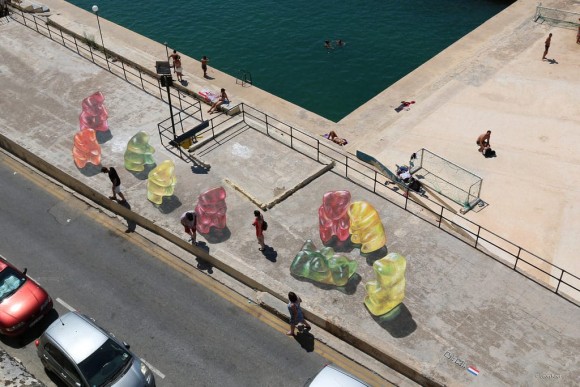 Can you imagine how utterly satisfying it would be to chomp their squishy little heads off? As stressed out as I am lately, I sure can!

In a way, though, this giant gummy bears illusion makes me feel a little like an underachiever. I mean, someone out there spent so much time and effort creating a giant gummy bear illusion that can only be seen from above. The artistic talent it would take to create something like this is amazing!

I wonder what it looks like from the ground, though…

If you loved this giant gummy bears illusion, make sure you take a moment to rate it with the stars below! Then, check out some of these other awesome street art illusions!