I run into a lot of interesting pictures on the Internet in my travels. Some move me, some make me laugh, and some make me think. Then there are the pictures that just leave me in complete and total bewilderment. These are the pictures that make me scrunch my face and stare at the computer screen, mouth agape, for a good few moments. Now those are my favorite! And, I just so happen to have one of these for you today. I call this real stair illusion…The World’s Weirdest Stairwell… 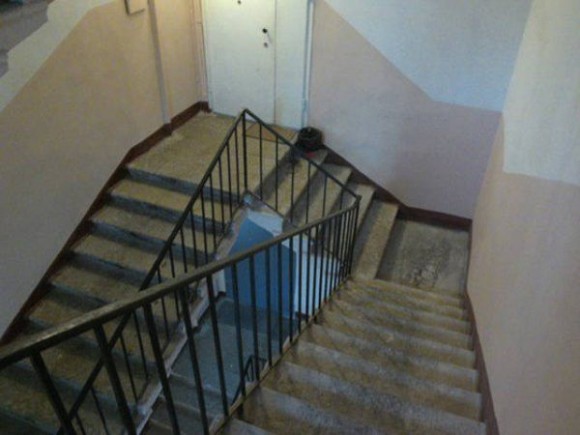 I would really like to know what was going through someone’s head when they built the World’s Weirdest Stairwell! Was it actually designed like this? Was it an accident? How did someone not realize that something was amiss here during the building stage? Whose fault is it exactly? I don’t know about you, but my money’s on the guy who can’t use a tape measure!

I even thought that this stairwell here may have been some sort of a trick of the eye or Photoshop job, but I don’t think so. I think this little gem is just a real stair illusion, created on accident by a bunch of workers who had too many beers on their lunch break. At least I hope so.

If you liked this real stair illusion, be sure to also check out Escher’s staircase illusion!