Before describing today’s illusion, I just want to inform you that I’m aware that Mac and PC widgets stopped working, but Michael Tughan already fixed them. I uploaded new versions, and I’ll publish the link in day or two, when widgets get approved by Apple and Yahoo. I also added some Harry Potter ring tones in the sidebar, can you find them?

Ben Gundry and Juank both submitted this awesome optical illusion photographed in Mexico. Ben said: “Here is a very topical illusion that was a front page photo last week in Mexico. It shows last weeks lunar eclipse appearing to be held by one of Mexico’s most famous landmarks and symbols El Ángel, (The Angle of Independence).”

Juank added, “Today August 28, there has been an eclipse here in México that was visible from all of the country. It began after 1 a.m and concluded around 6 a.m. I live in the capital where we have a monument called “El Angel de la Independencia” (The Angel of Independence) which is the sculpture of a winged victory made of bronze and covered with gold. In her right hand the Angel holds a laurel crown. In one of the pictures I’m sending you, it seems that the Angel is holding a red moon... little bit creepy. In the other picture, there is the same effect but with a clear and shiny full moon. I hope you like the photos, taken from a local newspaper web site.” 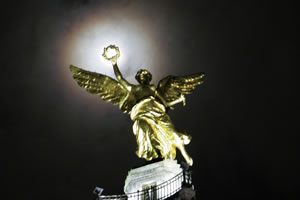