After recognising our “Two Glasses Illusion”, user named stg2 sent us this wonderful photo of a “flying” motorcycle. He also provided detailed explanation how this type of optical illusion works. Jump inside this post to read it! Thanks stg2! 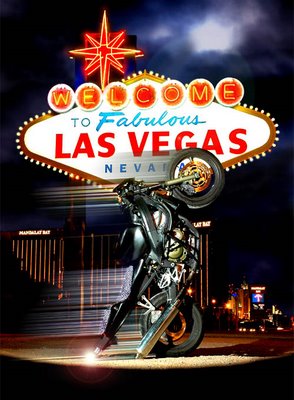 “I had the camera on a tripod just inches off the ground. The shutter speed was 4 seconds, the aperture was set at f. 11. My son stood just out of camera view to the left of this photo with a Vivitar 283 flash in his hand. No link to the camera. When I fired the camera on a 5 second timer, he watched the red light flash when the timer counted down and when the timer went off and the camera shutter opened, he hit the test button on the flash which was aimed at the front facade of the bike, one flash which exposed the bike perfectly, then the remaining four seconds allowed the lights of the sign and the strip in the background to BURN IN giving both the foreground and the background the correct exposure. —- Only photoshop was the motion trails and the lens flare on the tail light, Other than that, the image is as it was recorded. Pros call this dragging the shutter with a fill flash or painting with light.

For a photographer, the shot shown at “Two Glasses Illusion” is no mystery. Place the glow ring which has been exposed to light and glows in the dark, flat on the table in the starting position, with the camera on the tripod and on bulb or a slow shutter speed like four seconds etc., turn all the lights off in the room and fire the camera with no flash, when the shutter opens and remains open, start raising the glowing ring to the position you want to be your final placement. When the glow ring arrives at the top location, with the camera shutter still open, fire a flash manually by hand using the test button etc. Your final image will be a glow ring rising from the table with the glow trails visible and the final flashed image of correctly exposed hands holding the ring in the final position. This is a painting with light technique used by virtually all commercial professional photographers. I used a similar process when I took this photo of my son’s motorcycle in front of the Welcome Sign on Las Vegas Blvd.”