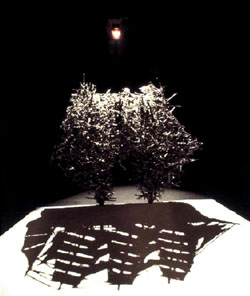 Due to author’s request, we had to remove the video in our previous post, and were instructed to replace it with original YouTube’s embeddable code. It isn’t my preferred choice (not to have our self hosted video player), but what’s important is that you can still see the flick.

On the other hand, I have received this magnificent installation, one that greatly resembles Tim Nobel and Sue Webster’s optical illusion opus. Check the garbage formation. It doesn’t resemble to anything meaningful. But cast a light on it from certain point of projection, and the marvelous sailing ship magically appears.

Many shadow illusions can be seen if you follow the #shadow tag, but what’s more staggering (for me) is how you didn’t like the Trashy @ Sign Shadow. Perhaps because it was put aside to our new iPad App?

22 Replies to “Another Garbage Shadow Illusion”