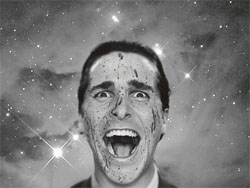 Yup, it’s the American Psycho, also known as Christian Bale. I’m not sure whether the screenshot used in this optical illusion was taken from his Hollywood movie, or whether it’s the paparazzi shot during Christian’s Terminator rampage incident (when he went nuts on stage). If you think I’m joking, listen to the publicly available audio tape.

But all this doesn’t concern us too much, what we’re here for are the illusions. This time we have slightly different afterimage animation. Originally, authors create similar animations that switch between frames every half a minute or so. First you see colorful negative, then black and white photo appears. You get the impression black and white photo you are seeing is actually produced in color, because the afterimage was temporary burnt into your retina. This time we have exactly the same illusion, only frames switch much faster. What amazed me, is that the illusion still works – even better perhaps. To conclude this, I can assure you that there are only two frames – black and white one, and the color-negative. The more you observe, the more colors on Christian appear! P.S. You can check ultra-fast version of this, just be sure you don’t have problems with seizures or something…

54 Replies to “American Psycho in Color”