There was a post about 3D Floor Tiles, published two years ago. Pattern used when assembling the floor is a well know Escher inspired optical illusion. But in my opinion, no one ever bothered to explain how this works in little more detail. If you saw them tiles somewhere around the internetz previously, you probably learned they can be seen in two completely opposite directions; both as ascending, and descending stairs made out of blocks. From my experience, I learned that some people have hard time visualizing both. So I opened Photoshop, and made some changes to the most recent photograph made by Reuters. My edits were subtle – I added a second businessman, vertically flipped him, and then positioned him on the right part of the photo. Those bold outlines were added by me as well. I hope this will help you to try and visualize the left businessman stepping down, while in the same time seeing right businessman climbing up the blocks. NMN pointed me to this illusion, and I added his funny comment below the picture: 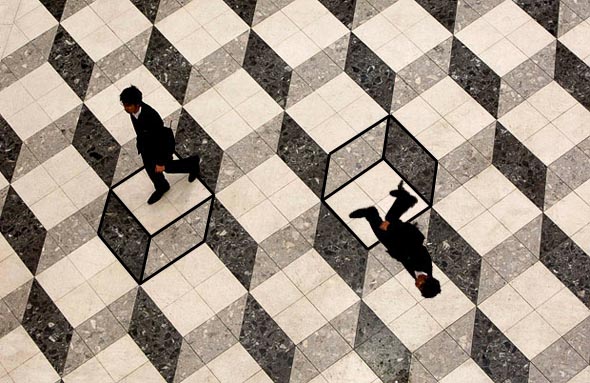 Is this a giant game of Q*Bert? – NMN

13 Replies to “A Man Walks in a Building in Tokyo”